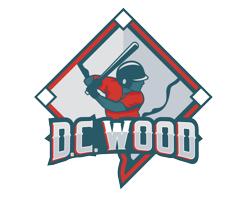 If you are a player looking to join our League, click "Register" and select NEW PLAYER to get signed up FOR the Summer/Fall 2020 season! If you want to enter a team, please email us at management@dcwood.org

DC WOOD is pleased to announce its Summer/Fall season! This will be the only season offered in 2020.  Please click on "2020 Season Info"for more information on our SAFE PLAY guidelines, CDC recommendations, participation agreement, and Virginia's PHASE II guidelines.

You can read about the history of our league in the "About" section.

On a surprisingly rainy evening, the Mallards and Barons met for game #1 of the DC Wood Championship series at the beautiful Lake Braddock SS.  The Mallards made an early statement as leadoff lefty power hitter, Witkowski, smashed a Home Run to dead centerfield.  The Mallards added another run before a 6-4-3 double play ended the inning.  In the Home half of the inning, Baron’s leadoff man, G. Ortiz, smacked an opposite-field Home Run to get the Barons in business. Two more runs scored before the end of a busy 1st inning. The Mallards and Barons went tit-for-tat through 3 innings before the Mallards chased the Barons starter and held a 5-4 lead.  With a tired bullpen, the Barons turned to Bolden for a reprieve from the Mallards offense.  Bolden did not disappoint as he went the rest of the game with no more runs allowed and 8 K’s.  The Barons offense finally showed signs of life after sluggish semi-final series and kept the hits coming leading to 13 runs.  Rivenbark had 2 doubles with 3 RBI and Bolden helped his cause with a mammoth 3-run Home Run in the 5th inning.  Rogers and Shoenfeld also chipped in with a multi-hit game.  Richards led the offensive attack for the Mallards with 3 hits.  Barons 13, Mallards 5.  The series continues on Friday, 8pm at Thomas Jefferson HS.

In a match-up of the two most winningest franchises in league history, the Barons and A’s squared off in a semi-finals game that would determine who advanced to the Championship Series; the game did not disappoint!

Long-time Barons lefty, S. Nelson, took to the mound for the Home team and the Visiting A’s countered with D. Cruz.  The Barons took a lead in the bottom of the 1st off a McEnhimer single, and Nelson worked a smooth two innings, but in the bottom of the 2nd, the skies opened up for a 10-minute period of moderate rain. Both teams were quick to tarp the field, and after a 25-minute rain delay (and some efficient field maintenance) play resumed.  In the top of the 4th, the A’s rallied to tie the game when Bryner singled to left, driving in Omeir.  With the bases loaded and one out, Nelson could not continue due to a popped blister and was relieved by Yee who secured two straight outs to quell the A’s rally.  The Barons answered quickly when McEnhimer blasted a ball over the right field fence, giving the Barons a 1-run lead after 4 innings.  In the top of the 5th, the A’s loaded the bases once again and tied the game when Z. Bright walked, driving in Omeir.  The next batter worked a 3-1 count, but Yee induced a lazy pop fly to 1st to end the inning, minimizing the damage.  In the top of the 6th, Barons turned to reliever, Rivenbark, who quickly secured two outs, but allowed the next 2 batters to reach base. The 3rd batter of the inning hit a shot to 3rd base that was knocked down by Taran, which prevented the runner at 2nd from scoring.  With the bases loaded, the A’s seemed poised to finally capitalize on a big inning when Rivenbark went down 3-0 in the count to A’s slugger, Garboczi.  Somehow, someway, Rivenbark rallied and secured 3 straight strikes to get out of the jam.  In the bottom of the inning, the Barons finally got some base runners to load the bases.  On an 0-2 count, Shoenfeld hit a slow roller to the right side of the infield to drive in G. Ortiz.  A’s reliever, Bryner, had his own rally as he induced a slow roller to 2nd to end the Barons chance to get more runs.  In the top of the 7th, the Barons turned to McClure in relief, who was rudely greeted by an Omeir double down the line and a Bryner single.  With the A’s once again loading the bases, the Barons secured a force out at home, a strikeout and a popfly to end the A’s threat.   In the 8th, the A’s once again rallied to put baserunners in scoring position, but McClure emptied the tank, K’ing 2 and inducing a ground ball to end the inning.  In the bottom of the 8th, the Barons could only muster a few foul tips off A’s reliever, Bright, who worked a quick and clean inning.  In the top of the 9th, the Barons sent season-long Ace, Sawyer to close the door. Sawyer, coming off pitching 7 innings in the 100+ degree weather the previous day, was on fumes but took the challenge head-on.  In the Barons only clean inning of the night, Sawyer went 1-2-3 to secure the Barons birth into the Championship series.  What a game!

The A’s pitching was effective throughout the game, allowing only 4 Barons hits and 3 runs (2 earned), but on this night, the Barons squeezed by with big pitching moments and key defensive plays that squashed what seemed to be inventible A’s rallies.  Omeir and Bryner had big days at the plate for the A’s, getting 3 doubles 2 singles and an RBI between them.  McEnhimer went 2-2 with 2 RBI to pace the Barons, Rivenbark picked up the Win and Sawyer the Save.  The Barons advance to the Championship Series for a rematch of last year’s series with the Arlington Mallards.  Game #1 is Wednesday July 24th at Lake Braddock SS, 8pm.

McCarthy’s Gem Sends Mallards Back to the Championship Round

Following a convincing win in game 1 of the series, the Mallards looked to continue what had been a good start offensively. The game began modestly as both lineups had nothing to show in the first three innings after 9 straight retired batters.

Mallards and Navs Kick Off Playoffs with Thriller at Lee

Playoff baseball was in full effect as the first game of the first series came down to the wire.  Pitchers dominated and every base runner mattered.

Mallards prevail in a game dominated by pitching and defense

On Friday at Langley HS, the Mallards and Bullets combined to play one of the fastest 9 inning games (just under 2 hours, 30 minutes) all season as dominant pitching and error-free defense on both sides shut down these two offenses.

With the season series tied at 2-2 series and the score locked at 0-0 into the 9th inning, it looked like these teams might be headed to extra innings to resolve the tie. Finally in the 9th inning, as the Bullets' starter Stenavich started to tire, the Mallards mounted a rally which began with a leadoff double by their pitcher Brady Adam. Later in the inning, they worked back-to-back bases-loaded walks to break a 0-0 tie. In the bottom of the 9th chasing two runs, the Bullets threatened when the first two batters reached base. As the winning Bullets run came to the plate, Adam, who yielded only 3 hits and struck out 15 through 8+ innings, was relieved by G. Gill who then retired the side.  Though he was credited with the loss, the Bullets' ace Stenavich pitched a gem by striking out 9 and only giving up 5 hits.

The Bullets and Mallards split their DH Sunday at Greenbriar with the Bullets coming back from a 4-1 deficit to win 5-4 in game 1.  The Mallards took Game 2, 8-1.

In game 1, after the Bullets grabbed an early 1-0 lead, the Bullets' Mildenstein walked the bases loaded in the 3rd inning before the Mallards' T. McCarthy hit a grand slam. The Bullets cut the deficit to 4-2 in the bottom of the 3rd and then rallied for 3 in the bottom of the 6th to retake a slim 5-4 lead.  In the 7th, the Mallards had the tying and go-ahead runners in scoring position before the Bullets' Narvaiz, who relieved Mildenstein, got the next Mallards batter to groundout to end the game. Mildenstein got the win and Narvaiz earned the save.

In game 2, the Mallards' O'Donnell was magnificent on the mound earning a complete game win. He gave up only 3 hits (2 of them to Bullets' Klein) and struck out 8. Gill had a leadoff solo HR and Witkowski had a 2-run HR in the game. The Bullets and Mallards season series is tied 2-2. The teams will meet for a 5th time Friday night at Langley HS to decide the season series.

The Mt. Pleasant Mudcats and the Alexandria A’s squared off at McLean HS on Saturday June 22 and both teams went the distance. 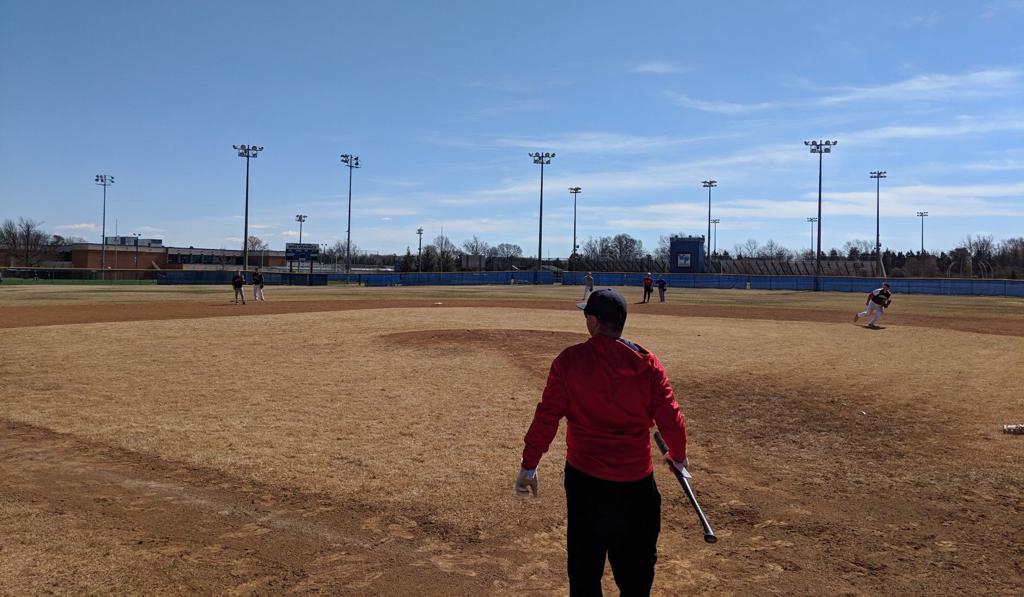 The league held a tryout and draft for free agent players at West Potomac HS on Saturday, March 16. All DC Wood teams sent representatives to scout the players who attended. After the workout, more than 40 players were drafted!

After the first two games of this Championship Series, it was not only that the Arlington Mallards had the defending DC Wood Champion Falls Church Barons down 2-0; it was also the decisive way they had done it.

For the decisive game 5, with the series tied at 2-2, the Barons sent their ace, McClure to the mound.  He was rudely greeted by the determined Mallards, and the Barons were down 2-0 before they could send a player to the plate in the first inning.  When they did, however, it was clear that they were equally determined.  Barnes sent the first pitch of the bottom half of the inning over the right field fence!   Then, before the first inning was complete, the Barons’ McEnhimer smacked a two-run home run to dead center to give the Barons the final lead of this series.  The Barons added 4 runs in the third inning, highlighted by a Glaser bloop single that drove in 2.  The Mallards did not feel this ball game was over yet, however, and in the top of the fifth, the Mallards they got two runs to cut the lead to 7-4.   But in the bottom of the sixth Shoenfeld's infield single drove in a runner from third.  In the seventh, the Barons’ Ortiz sent a ball over the fence and way past the tree line in left centerfield, giving the Barons a their final 9-4 lead.  The Barons’ McClure, who pitched well after surviving the first inning trouble, was dead tired as he took the mound in the ninth to finish his job, and the still game Mallards got runners to first and second with one out.  But when McClure got a big strikeout and an easy ground ball back to himself he was able to record the final out and complete the Barons’ fantastic comeback series win. This victory gives the Barons their 5th consecutive D.C. Wood Title and cements their legacy as one of the best local adult baseball teams of the decade!  This is also the Barons 7th overall title.  Caylor, Nelson, and Martinez have been a part of all 7!  Congratulations to the Barons on their latest win and their tradition of excellence!